“A thing is never finished, it is just abandoned.”

– someone wise, a long time ago

As I launch our Digital Agency site MGO Studios, let me say front and center, it’s unfinished, the paint is fresh and some edges might still be rough. Is it noticeable? Is it a deal breaker? You tell me. Through all the years it’s funny how much I used to build up mistakes or ugly spots in my work internally, secretly, to an almost paralyzing degree. I’d go through the same cycles of doubt, loathing, and perfectionism every time. All to have the client be totally blown away by the other 95% of the design that was kicking butt once I submitted the work.

The point is, it will get there, always does, but as my tooth has grown so has my wisdom. What it tells me, deep down is now is better than perfect. Get it out in the world before a meteor hits earth, or some super villain sends us back to the dark ages with his freeze ray.

So I launched MGO’s website (yes, the very one you’re surfing across now) when it wasn’t ready, or fit or as pretty as I’d dreamed all the days leading up to it’s unveiling. And look, the sky isn’t falling, my reputation isn’t destroyed, I don’t even have one negative email in my inbox. In fact, the week I launched this and started sharing it around I landed a new client. The masters have known this – Walt, da Vinci, Musk, Bezos, they know the power of urgency, of getting the project, whatever it is to a launch-able state. They had faith in their standards, of nature, once a thing is out there, live, if you’re committed then of course it will improve and evolve over time. Facebook 1.0 (2004) didn’t need to look like Facebook 2018, but it’s here because Zuck just got started and kept iterating for quality and better connections.

When is it done? Where is the finish line on an idea? When do you know it’s complete?

The Japanese have a term for traditional aesthetics they call Wabi-sabi. It’s a way of seeing the world centered on the acceptance of transience and imperfection. This concept is sometimes described as one of unfinished beauty, natural decay, where inner ideas and blistering reality meet head on, resulting in asymmetrical, unpredictable allure. Imperfect, impermanent, and incomplete. Is this not the essence of a work in progress?

This concept isn’t new, they’ve been embracing it for thousands of years in Japan with great revelry and appreciation. It’s because the idea carries a naturalistic approach to life and design that’s it has spread far beyond the shores of it’s native birthplace. The idea had wings from day one, and I’m sure it existed long before it even had a name.

My earliest art-inspired epiphany was seeing the cartoon Steam Boat Willy. I was four years old but it was so clear, even to this day, everything about that moment preserved in a bubble. The afternoon light coming through the drapes, shadows of the sagging fall leaves dancing about, and there in the corner, my grandma’s 20 inch Zenith TV blowing my mind. It was the beginning of a life long obsession that started with a mouse and transformed into a quasi- mentorship in life, by studying the times and deeds of Walt Disney. Even today our whole family visits that magical castle in Anaheim at least once a year. My passion and curiosity for visual storytelling and design all stemmed from the foundation of the house of mouse.

One thing I always go back to for a refresher in vision is the speech given by Walt Disney on opening day of Disneyland back in 1955. His words are the same etched into the commemorative plaque that sits at the base of the flag pole on the south end of Main Street to this day. 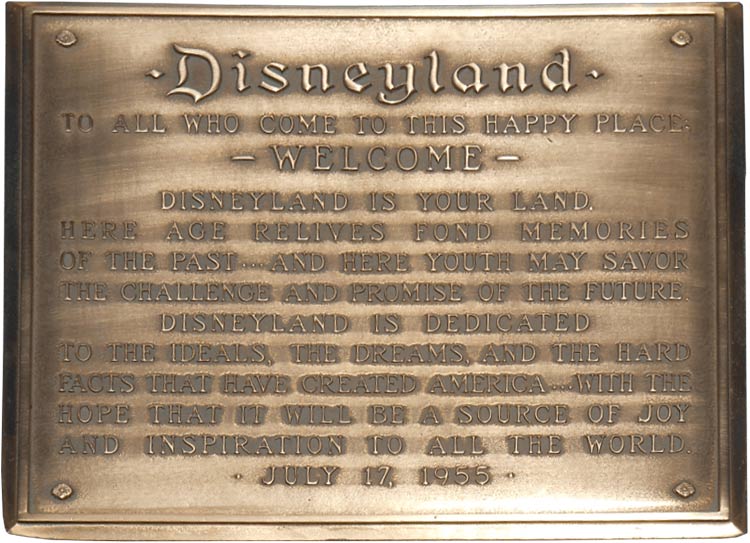 In this brief but impassioned text is everything the executives, Imagineers and staff need to guide them through the future. It talks about age reflecting on youth and youth looking to the challenges and wonder ahead. If you read between the lines, the subtext is screaming, we are all unfinished, all a work in progress.

This unassuming little plaque out on display is the North star of Disney, and they’ve done a great job staying the course. Walt Disney took it further, beyond any sane person’s imagination. For him, the park, the film studio, even the technology was always a work in progress. He pushed the boundaries, broke down walls and then did it all over again but bigger, faster, funner. Those are the principles that were impressed upon me studying the Disney way. It’s the approach I take with my own business as well as the clients I serve. Iteration, step by step, working into the grooves and finding the core of the piece and not getting hung up on micro details. Even this master storyteller and businessman lived this truth.

In my experience, this is the approach that yields the most joy and effectiveness. Contrary to popular belief, these two elements don’t exist exclusively, they can, of course yet like any undertaking, variety keeps it fresh. Crossing that finish line, that’s what counts, but the more joy you can infuse and tease out of the process, the better. By letting go of every microscopic detail you will open up flow, and release the potential in you, your team, your business.

Understanding that the world and everything in it is a work-in-process to some degree, can unlock a sense of freedom and let you create out to the box, where new ideas and inspirations can run. Those tiny details will always slow you down, it’s ok, skip over it, you’ll come back, or maybe you won’t. Working like this takes a certain kind of reckless creative faith. It may sound undisciplined but only if you lose forward momentum, even if your ideas don’t fit just yet, keep moving, get to that finish line. Save the small stuff for the second pass and don’t feel a drop of guilt about it. You’re finishing and that always trends toward winning in the long run.

Welcome to our journey, I hope you enjoy the rough edges.